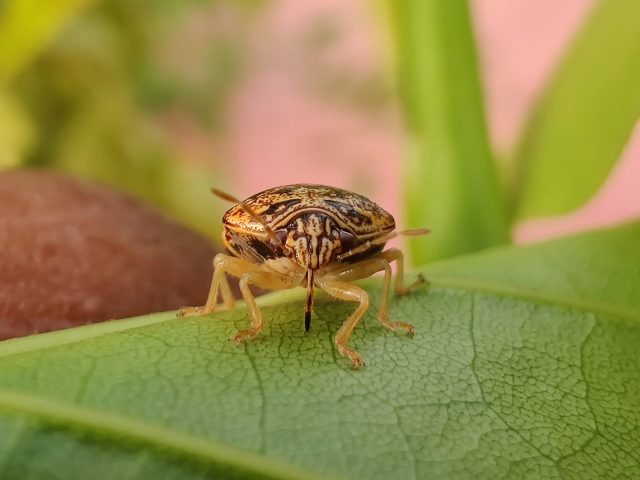 Several species of stink bugs are found in the U.S. However, a new species has recently appeared, the Brown Marmorated Stink Bug (BMSB). Homeowners and farmers are concerned about its presence. The BMSB originated in Asia in the 1990s and has since traveled to many states.

In the spring, the adults appear and feed on plants, damaging or spreading diseases on fruit, vegetables, and other plants. Since the bugs produce their offspring during the summer, they seek shelter in the fall when temperatures drop, causing severe infestations in homes and businesses. Where do stink bug infestations come from? A variety of factors causes their presence, but these primarily cause them:

They affect many fruits and vegetables, including apples, pears, apricots, cherries, grapes, lima beans, peaches, peppers, cauliflower, and potatoes. Ornamental plants near houses and other buildings are also known to be eaten by them.

Smelly bugs seek shelter for diapause when they are inactive, during the summer and early fall, as the days shorten and the temperature drops. When they find a suitable location, stink bugs release a pheromone aggregation, attracting other stink bugs there. It does not feed or reproduce during its overwintering phase. The female is not capable of producing until springtime. While overwintering stink bugs can be an unwelcome pest, they aren’t harmful to structures, fabrics, or foods stored in homes.

They won’t harm you or your pets, but they can be a real pain if you have a home garden or grow crops. Since stink bugs are herbivores, they will seriously harm plants to obtain food. According to Macy Ruiz, a board-certified entomologist and technical services manager for Ehrlich Pest Control, they have glands that secrete a terrible odor as a protective measure when they feel threatened.

Infestations of stink bugs are often caused by openings in foundations, window and door frames, soffits, attics, and beneath the siding. An overwintering population of stink bugs is located near agricultural fields, fruit orchards, extensive gardens, and other places with trees and shrubs infested with ornamental pests.

It is essential to exclude stink bugs from a structure to prevent infestations. Water fixtures, pipes, and wooden fascia boards should be sealed around windows, doorframes, and under wooden fascias. Bugs are less likely to enter through roof vents if the screens are tight-fitting and without holes. Another good way to keep bugs out of your home is to close your fireplace when not in use. You should remove stink bugs with a vacuum if they happen to make it inside. When it comes to a small population of insects inside your home, you can remove them with a tissue or paper towel and place them in an outdoor container.

Owners of homes and buildings often contact pest management professionals before attempting to eliminate stink bug populations on their own. The sooner you get a professional, the more time, money, and frustration you can save. You can request a free inspection from the branch nearest you if you’re facing problems removing BMSBs from your property. Using science-based solutions, Orkin can solve the problem of pests.

How to get rid of stink bugs?

As the leaves change color, the air becomes crisp, and the smell of pumpkin pie fills the house, it’s time for autumn to arrive. A less than a favorable sign that autumn is approaching is the return of stink bug. In search of a warm place to overwinter, stink bugs invade homes during the cooler months when they possess a reputation for being smelly. Even though stink bugs pose no health or property risks to homeowners, they can quickly develop into an odoriferous nuisance around the house.

Since stink bug infestations occur in large numbers, they are difficult to control once inside. Stink bug are similarly challenging to manage as other pests, including ants and termites. Consequently, homeowners search for simple methods to ward off invaders before they grow into a problem. During the fall and winter months, it is essential to consider pest-proofing the home, both inside and out, to prevent insects such as stink bug and other pests from entering the house. You can take these 7 simple steps right now to get rid of stink bugs:

Take the time to examine the exterior of your home for easy access points to ensure proper stink bug control. Look closely at areas where installed siding and utility pipes, behind chimneys, and beneath wood fascias. Caulk and silicone-latex caulk can be used to seal any cracks or holes that are found.

Thousands of stink bugs can be carried in through even the smallest of openings, which is why damaged screens on windows or doors need to be repaired or replaced. Make sure the weather-stripping is intact, and the mortar isn’t loose. Consider installing door sweeps as well.

3. Make sure all lights are off.

The light attracts stench bugs, so it is recommended that outdoor lighting be kept as low as possible. Turn off the porch light and close the window blinds at night to prevent light from leaking in from outside.

Preventing many pest infestations can be as simple as eliminating moisture buildup around your house. Ensure that your pipes are not leaking and your drains are not clogged.

Removing their access to food is another method for getting rid of stink bug. Food should be stored in airtight containers, and garbage should be disposed of regularly in sealed containers. Ensure to clean the counters and sweep the floors to ensure no crumbs or spill residues.

Read More: A Detailed Guide About How To Get Rid of Mattress Worms?

Inspect, ventilate and clean crawl spaces, attics, basements, and garages to ensure they are free from harborage points. Install a dehumidifier in areas where moisture is a problem. Ensure you install screens above your chimney and attic vents.

7. Look at your belongings.

When bringing items such as boxes with holiday decorations and grocery bags indoors, inspect them for damage. This can give stink bugs a chance to get inside the house and make themselves comfortable.

Stink bugs are attracted to houses because of what attracts them?

Ruiz explains that stench bugs are attracted to bright lights. The expert says it’s not a bad idea to turn off your exterior lights and pull down your blinds before you get into bed if you tend to leave them on during the night and are dealing with a stink bug problem.

Is there anything that attracts stink bugs?

A Comprehensive Guide To Choosing The Best Awning Dealer

Choosing the Best Kitchen Remodeling Contractor for Your Renovation: A Guide

How to re-renovate your home