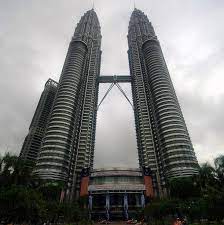 The Petronas Towers, nestled in the capital of Malaysia, is one of the most iconic architectural wonders globally, giving you the most scenic view of the entire city. These towers hold numerous emotions for their visitors, from awe-struck to eyes-captivated by their construction. So, you want to get stunned by the sky-piercing skyscraper? Then grab your Malaysia visa and buckle up to open your mouth wide at the view of Petronas Towers.

The twin towers, which have endless attractions for their visitors, also have incredible stories about their construction. So here are the most interesting facts about the Petronas towers.

Petronas towers, also known as the twin towers in the kalua Lumpur, the capital of Malaysia, are an iconic landmark and a world-famous distinctive architectural structure. Both the towers fulfill the roles of being the most popular Kuala Lumpur tourist spots and the commercial buildings in the country.

The tallest twin towers and the seventh tallest building

At 451.9 meters (1483 ft) in architectural height, Petronas Towers once held the top record for being the tallest building in the world, surpassing the Willis Tower of Chicago upon completion in 1998 until 2006, eventually being overtaken by the Taipei 101 skyscraper in Taiwan, China, which is 509.2 meters (1671 ft) tall.

The fact that fascinates is that the record was held as two whole remarkable structures while the other stood as one.

The construction of the Petronas towers

The towers have the largest and deepest foundation on earth.

The cloud-piercing skyscrapers need a sturdy foundation to stand tall in pride. Petronas Tower has a ground-breaking foundation of approximately 120 m deep with its dense concrete footings to achieve the tallest height.

The twin towers have meaning.

In the early 90s, Petronas Towers had an agreement to be built as an icon for the capital of Malaysia, but today they are world-famous architecture with a unique style. They are the official headquarters of Petronas, Peroliam Nasional Berhad- the National Petroleum Company of Malaysia. They commissioned the construction and used the first tower as headquarters along with other companies.

The Petronas Towers are built-in into 590000 square feet of laminated glass.

Cleaning every window of the Petronas towers is equivalent to ten football fields and would almost take two months.

The design of each floor plate is influenced by the simple Islamic geometric form of two meshing squares, eventually creating an eight-pointed star. The Malaysian late Prime Minister, Dr. Mahathir, encouraged the designer of the twin towers to stand out by reflecting the Malaysian identity and being the tallest building. Interior motifs resemble the local handicrafts and weaving patterns, giving a stunning finish to the structure.

The towers stood by a renowned architect.

Cesar Pelli, an Argentine-born American, is the architect of the iconic Petronas tower. He specialized in designing skyscrapers, as his other remarkable tallest buildings, located in multiple countries. Cesar Pelli was named one of the ten most influential architects in the United States in 1991 and was awarded a gold medal by the AIA in 1995.

Cesar Pelli’s other works include the International Finance Center in Hong Kong and the World Financial Center in New York.

The double-decker sky bridge connecting the towers on the 41st and 42nd floors weighs 750 tons. Fascinatingly, the engineers brilliantly built them without being fully attached to the main building to sustain the building and allow them for small movements during high winds and changing weather. It is 170 m above the ground with a length of 58.4 m.

Petronas towers can withstand a hurricane.

To ensure high safety and construction regulations, they are constructed in such a way that they can withstand the winds up to 65 miles per hour, about one-third the speed of Hurricane Katrina.

Despite being surpassed as the tallest building, the Petronas Tower still provides one of the best skyscraper experiences to witness. So, get your Malaysia tourist visa and explore the facts about the twin towers.

Apart from this if you are interested to know more about Butina Boats Services in Abu Dhabi then visit our business category.